If Joshua Pettit was in jail for his debts, once his balance was paid he would be a free man. There didn’t appear to be too much social stigma attached to being imprisoned for debts.  In fact, several well-to-do persons found themselves jailed for insolvency.  This would later include men like Revolutionary War hero “Light Horse” Harry Lee who spent a year in jail in Virginia after he helped secure freedom for the nation in the American Revolution.  Similarly, the Joshua Pettit who fell on hard times was at one time a trusted member of the community.  He was called upon on August 15, 1759, to assist Thomas Baker with the inventory of the estate of a deceased soldier by the name of Oliver Cushman.  There are some interesting Essex County family ties involving the three people mentioned in Cushman’s estate papers: Pettit, Cushman, and Baker.

First, let us look at the record  itself.  Then we will explore the connections.

Thus it would seem the Pettit, Baker, and Valentine families were loosely bound and there was some sort of association with the Cushmans as well.  Sadly, it appears some of these bonds would be tragically separated around the time Joshua Pettit found himself in jail.

Wills and inventories for Essex County residents for the years 1765-1767 suggest there was a shadow of death on the land due to the variola virus, or, what was commonly called “smallpox”.  This horrible killer cut a murderous path through the Valentine family in 1766.

Ichabod Valentine and Richard were brothers.  Richard married Phebe Haines and they had Jonah, Ephraim, Obadiah, Phebe, Mary, Elizabeth, and twins Rachel and Sarah.  Richard owned land near the Pettits (which we will explore in a bit). He died, presumably of smallpox, on March 10, 1766.  It is very possible he contracted the disease while visiting his brother Ichabod and his family.  Ichabod died on February 28, 1766. 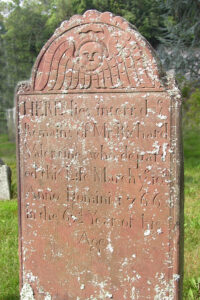 Richard Valentine, brother Ichabod, Ichabod’s wife Hannah, and their daughter Elizabeth all died in February and March of 1766.  After the death of three people in the Ichabod Valentine household, an inventory of the estate was eventually conducted.  The administrator for the estate of Ichabod Valentine had listed all items and their values including, in a eerie nonchalant manner,  “...the bed on which the small pox was.”  There is little question this deadly disease claimed their lives and may have permanently scarred the other members of the household –literally.

Ichabod had married Hannah Stanberry and their known children were Ichabod Jr. and Elizabeth.  There is a very good possibility there were others but their names are unknown at this time. Ichabod Valentine Sr., Hannah, and their daughter Elizabeth made out or revised their final wills within days of each other in February and March of 1766.  In Hannah’s will, the grandchildren of Ichabod and Hannah Valentine are mentioned as Rhoda Valentine, Sarah Pettit, and Bartholomew Pettit.  Who these Pettit grandchildren were, who they belonged to and what happened to them is an unsolved mystery.

During this time period, the usual practice was to distribute the estate to living children.  If any child was deceased, the heirs of that child (ie grandchildren) would then be included. It would be somewhat unusual for special provisions to be made for grandchildren if their parents were living.  Exceptions to this practice did exist, of course.  An exception might be if the grandchild’s father was imprisoned for debt.  In that situation, passing assets to the free mother of the child would result in their immediate forfeiture to the creditors.  Passing them to the minor grandchildren thereby making it effective when they come of age would likely circumvent this and ensure that the assets made it into the hands of the appropriate heirs.

One possible scenario is this Joshua Pettit married a daughter of Ichabod and Hannah Valentine.  When smallpox tore through the county, his wife may have succumbed to the disease leaving him with two small children, Sarah and Bartholomew to tend to.  He may have found himself in debt shortly thereafter in late 1765 and been imprisoned by the time the Valentine wills were revised in February and March of 1766.  This is, of course, pure conjecture and researchers are encouraged to not pass this theory along without properly noting it as such.  It is equally possible these children belonged to some other Pettit father and may have had no connection to Joshua Pettit.

There is nothing currently known that proves or disproves a link between Joshua Pettit and the Valentine family though they were certainly in the same social circles and seem to have all resided in the same area at or near Scotch Plains.  A more precise location can be determined by referencing a book written in 1852 which gives some amazing details of the land of Richard Valentine and Benjamin Pettit.  According to The First Settler of Passaic Valley by John Littell:

Richard Valentine owned lots 35 and 44 of the Elizabethtown lots and lived on lot No. 44… This lot contained 184 acres and extended over the Mountain and adjoined Peter Wilcox’s tract; lying west of it.  It also adjoined the [Benjamin] Pettit tract No. 45 lying west of Valentine’s.  He married Phebe Haines and died 10th March, 1766 aged 63 years; his widow, Phebe, married William Miller, of Westfield, and after her death she returned to her former homestead on Stony Hill… [page 455]

Benjamin Pettit, Esq came from New Rochelle, in the State of New York, to Passaic Valley, and by deed dated 31st December, 1729, purchased 105 acres of land of Jona Calre; he also purchased 100 acres adjoining and lying west of the other tract, and between that and Nathaniel Smith’s tract and both adjoining the River… [p319]

The lots mentioned are what are commonly referred to as the Elizabethtown “Clinker Lots”.  The word “lot” is a bit of a misnomer.  The majority of these were not town lots laid out in little blocks as is typical in many modern urban locations.  Most of these were large irregularly shaped tracts lying well outside the town proper.  Many contained a hundred acres or more.

The Richard Valentine land “extended over the mountain”.  This would probably have been the Second Mountain.  “The First Mountain” (a.k.a. The First Watchung Mountain, a.k.a. The Blue Hills) is the first set of hills to the west of the Green Brook.  “The Second Mountain” (a.k.a. Second Watchung) is the set of hills west of that.  Beyond the second mountain is a small set of hills called “Stony Hill” which can be identified on modern maps by locating the head waters of the Stony Brook.  West of the Stony Hills is the Passiac River. The map below gives a good rough sketch of the area in question:

Scotch Plains (shown above) was originally the low fertile area east of the First Mountain by where the Green Brook came out of the mountain pass to the northwest.  The Valentine lot would have included part of Stony Hill and part of the Second Mountain. As mentioned above, the Benjamin Pettit tract (lot 45) was west of Valentine’s tract.  Also nearby, according to Littell’s book, was land of Thomas Baker Jr., Peter Wilcox, and Nathaniel Smith as well as land in the Day and Badgley families.  The Day’s married into the Benjamin Pettit family and the Badgleys married into the Valentine family.  The majority of these families lived close to Scotch Plains but actually just a bit west of there.  Their lands were in the hills and the valley between the first and second hills.  Benjamin Pettit’s tract, for example butted up to the Passiac River and stretched back east towards Stony Hill.

The Shotwells were nearby but were not over the mountain.  According to Littell’s history, they were down at the Green Brook on the road between Scotch Plains and Plainsfield (called “The Plains Neighborhood” on the 1750 map above).

In a later article, these families and their interesting connections will be thoroughly explored.  For now, we know these people lived in roughly the same neighborhood as Joshua Pettit.  It is important to keep in mind that these families owned large tracts of 100 or more acres each.  As such, what would seem like a great distance between houses in modern times of 1/2 mile or so, was merely the standard distance between farms for this colonial society.  The locations of their family lands stretched over multiple mountains and valleys.  We know roughly where this was and also know the location of the Shotwell land which narrows our search area down immensely.  Though the land records of the Pettits have not been found, the records of these other families will allow us to finally home in on Joshua Pettit’s own little piece of Essex County.

The final article in this series can be found here: Joshua Pettit of Essex Co., NJ: On the Map (Part IV)