A number of families have been tied together in this series.  Their histories, interconnections, and relevant facts have been revealed in order to show who the people were in the neighborhood of the New Jersey Joshua Pettit.  Since we know who they were and where they could be found, we can use them to locate his old stomping grounds as well.  Now it is time to take this data and plot it out on a map.  In doing so we will identify the most likely location of Joshua Pettit’s land in Scotch Plains, NJ and see where it would be located today.

Joshua Pettit Land on Both Sides of Green Brook.

As previously mentioned, Joshua Pettit sold his land to John Shotwell prior to 1776.  This land was located on both sides of Green Brook near Scotch Plains.  Using clues found in the actual estate papers, a crude sketch of the land can be rendered as seen below: 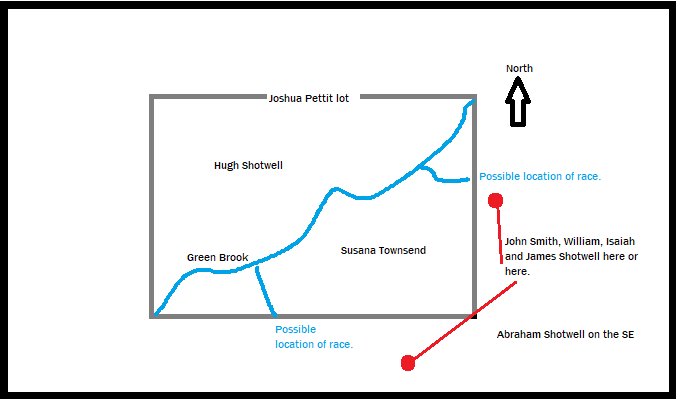 Between the time Shotwell’s will was penned in 1776 and the time he died in 1779, a map was made of the area around Scotch Plains by Capt. Cornelius Vermeule Jr.  It was drawn in 1778 under the command of General George Washington. A modern recreation of that map is seen below: One  of John Shotwell’s tracts is shown on the right-hand side of the map highlighted  in red and green.  This may or may not have been a portion of the tract mentioned in his will.  Regardless, there is a fair chance if it wasn’t, it was probably close to it.  This tract is bounded on the north by the road to Scotch Plains, on the south by Cedar Brook, and is located north northwest of the intersection of current day Watchung Ave and Woodland Ave.  “Green River” aka Green Brook is seen just to the north and forms the northern boundary.

On modern maps, Cedar Brook, which formed the southern boundary of the land above, is not shown to extend as far north as it did on older maps.  In the 1778 map (above), it extended up near Green Brook and paralleled it into Scotch Plains.  It’s original course is depicted as late as 1905, however, and can be seen on the USGS map of the area below:

No doubt the watershed and path of Cedar Brook have been altered by 20th century urban and residential developed.  Despite this, we can use the 1905 map to determine where Cedar Brook would have been on the current map in 2021.

The Shotwell tract depicted in 1778 was bounded by these two brooks.  His land was said to have been located on the road from Plainfield to Scotch Plains.  This narrows down the area we are looking for significantly.  When all these factors are taken into consideration, we can locate this area precisely on current topographical maps in the Plainfield and Scotch Plains, NJ area. How do we do this?

Fortunately we have an anchor point on the 1778 map that correlates to the modern maps. This will allow us to reconcile them quite accurately.  The 1778 map shows the intersection of what is present day Watchung Ave and Woodland Ave at the south end of John Webster’s tract.  This very same intersection is seen on the modern map below:

(To view the location above on Google Maps following this link: https://goo.gl/maps/Yqv7NgD7fih3ZCdr5)

Now we can take this intersection on both maps, as well as other noted roads and brooks, and use this to correctly orient the 1778 map on top of the current topographical map.  Though there is some distortion, and the two maps do not synchronize perfectly, the location of John Shotwell’s land can be easily marked out on the 2021 map as seen below:

1778 map superimposed on 2021 topo showing the location of John Shotwell land as well as Manning, Vail, Webster and others. (CLICK TO ENLARGE)

Note how the intersection of the two roads matches as well as the location of Green Brook.

This map is a little busy.  To clear it up a bit, we will do a different view of the same rough property boundaries only (from 1778) and plot them on the map. Shotwell’s land location on the 2021 topographical map is seen below:

At the center of this tract today is a cemetery belonging to St. Mary’s Roman Catholic church.  This church was founded in 1851, well after John Shotwell had passed on and his land had changed hands. Nevertheless, it can be used as a point to quickly locate the Shotwell land on current maps.  (To see this location on Google Maps, which is roughly at the center of the old John Shotwell land, click here: https://goo.gl/maps/3rPxACLmp1xnnmp77)

It has yet to be determined if this Shotwell tract was the same tract mentioned in his will that he purchased from Joshua Pettit in 1776.  In all likelihood it was, but one cannot say definitively at this time.  One problem with drawing that conclusion, is this tract only contains land on the east side of Green Brook.  In the will, John Shotwell divided his land between his children and this land was on both sides of Green Brook.  On the 1778 map, the land on the west side is owned by members of the Vail family.  However,  this may not be accurate.  In fact, The Green Brook Historical Society, which has conducted quite a bit of research on the Vail family, claims this is erroneous.  They stated:

The map shows the location of the early landowners, mills, and the Blue Hills Military Post. The names associated with the Vail farm, however, are not correct. The property was purchased by John Vail in 1733; and not the John Vail Sr. from Green Brook who had four sons with the names indicated. The John Vail that purchased the plantation in North Plainfield was the brother of Samuel Vail and the uncle of John Vail Sr. and Stephen Vail Sr. of Green Brook.   –Green Brook Historical Society website, Access December 30, 2021.

So, it may be that the Shotwells owned the land on the other side of the Green Brook opposite the tract as well.  Perhaps it later belonged to the Vails.  Regardless, this information helps us zero in on a narrow area where Joshua Pettit would have owned land.  As mentioned, the land was on both sides of Green Brook.  It was sold to John Shotwell and, by all accounts, his land was in Scotch Plains.  This would place Pettit’s land somewhere below the first mountain and northeast of the Shotwell tract, if not the Shotwell tract itself.  Therefore, the most likely area where Joshua Pettit owned land is in the area shown on the map below: You can also see how close this land would have been to the Osborne “Cannonball House” where Joshua Pettit’s creditors met in 1767 (see red arrow on map).  To put it into the geographic context with the rest of New Jersey, the above map is centered within the red square on the below map: Lastly, it can be placed on a colonial map as follows:

That is most likely where the Joshua Pettit land was located.  Benjamin Pettit and the Valentine family were in the same vicinity but their lands extended up and over the mountain and into the valley between the first and second mountain.  This was included Stony Hill valley.

This maybe a somewhat protracted way of zeroing in on a colonial parcel but this is because there are a number of documents missing from the currently assembled record. For example, we do not know how Joshua Pettit came to own the land to begin with.  Was it granted? Purchased by deed? Or left in a will?  We also don’t have a record of when it was sold to John Shotwell.  Was it sold by deed?  Was John Shotwell perhaps one of the creditors who Joshua owed money?

A search of Essex County deeds in the New Jersey State Archives has not returned any deeds that pertain to Joshua or any other Pettits prior to 1776.  This is unexpected because there is a strong indication there were deeds available to researchers at one time.  John Littell in his 1852 book, First Settlers, not only mentions a Benjamin Pettit deed but also tells who he bought the land from and gives the precise date of the transaction.  He even says it was “by deed”. Littell had his hands on a deed, several deeds actually, and those deeds are nowhere to be found.  Clearly the information we have before us is incomplete and there are other deeds besides what is at the New Jersey State Archives.  Where are these records?  If that question can be answered, there will be much more to write about.  Until then, the hunt continues.

Have a suggestion on where to find the land records?  Please leave a comment below!