The contact form and the Pettit survey form were apparently malfunctioning for over a month.  They have been repaired and are operating properly again.  If you tried to send in a message or submit a… “In my possession is a record given by my grandfather Johnathan Pettit, taken from his lips by my brother William, about the year 1825, of which the above is a copy also that his ancestry were farmers, persons of information, and respectability…”

Benjamin Pettit of Essex Co., NJ owned lot #45 on Stony Hill. This land is shown on an 1845 map produced by historian John Littell. Neighbors that can be identified on this map include the Badgley, Frazee, Valentine, and Willcox families. 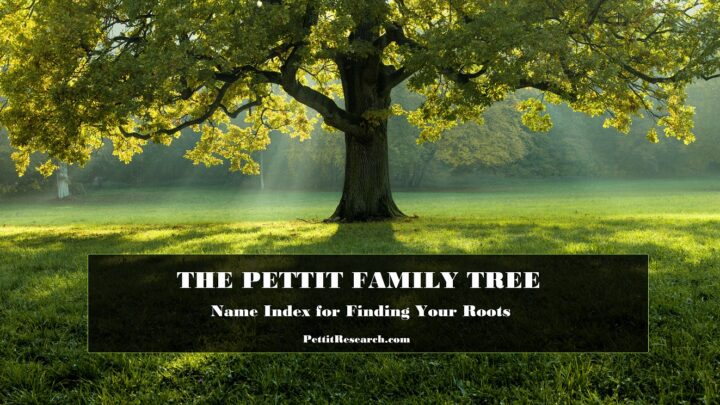 This pages provides a link to name indexes for the Pettit family tree so our cousins can easily find which Pettit clan they belong to. Wedding bells rang out on December 28, 1718, as Henry Pettit and Sarah Gibbs were married before the Reverend Sam Miles in Boston, MA.  The Presbyterian marriage was just 3 days after Christmas Sunday. Sarah Gibbs was the daughter of John and Mary Gibbs of Boston.  John Gibbs was a painter by trade, specializing in decorative staining and funeral escutcheons. The origin of the Pettit family name. Who were the first Pettits and where did they come from?

Now it is time to take this data and plot it out on a map.  In doing so we will identify the most likely location of Joshua Pettit’s land in Scotch Plains, NJ and see where it would be located today.

The Valentine family was decimated by smallpox in the late winter of 1766. Two minor Pettit grandchildren were named as heirs. The Valentine, Baker, Osborn and Pettit families lived very near each other in the Stony Hill and Scotch Plains area near the Green Brook.

The reason Joshua Pettit’s petition cannot be found in the record books of the Court of Common Pleas is because he was not a free man. He was in one of the jails in Essex County for the “crime” of being an insolvent debtor.

The precise location of Joshua Pettit’s land in Essex County, New Jersey has long been a mystery. In this article we will attempt to determine where his land was relative to the geography of the 1700’s and where it can be found today. Joshua Pettit (Josue Petit) a French Waldensian or Huguenot, arrived in Virginia in September of 1700 as a colonist bound for Manakintown.

John Pettit/Petit came to Virginia from France as early as 1638.  He settled in the Charles River County area which would become York County.  He was a surgeon.  He petitioned the House of Burgese to become a ditizen in 1666.  His will was written in 1669 and it revealed John Petit married a woman named Rebecca and had two daughters, Elizabeth and Margaret.

NOTE: There is every reason to believe this man’s name was Pettus and not Pettit. Unfortunately there are a number of genealogists who erroneously mix Thomas Pettus with Thomas Pettit and his wife Katherine who lived in a different area of Virginia. The information in this article is provided in order to help researchers keep the two men and their lives separated.

Thomas Pettit and Katherine his wife were in the Rappahannock River settlement in Virginia as early as 1656. They had one son, Thomas Pettit Jr and one daughter, Dorothy. It is likely that this Thomas is the ancestor of many of the Pettits in America today including those who trace their line back to Surry Co., NC.

The First Pettits in America Series. In this installment we look at the documents surrounding the immigration of Richard Pettit to Virginia in 1636 by Alexander Stomer. Tracing the Rachel Monroe/Pettit legend down through the years and finding it’s surprising origin. What did the earliest Pettit genealogists think of this and why does it matter?

We will attempt to list all the known children of Joshua and Rachel Pettit and their birth date and birth place. 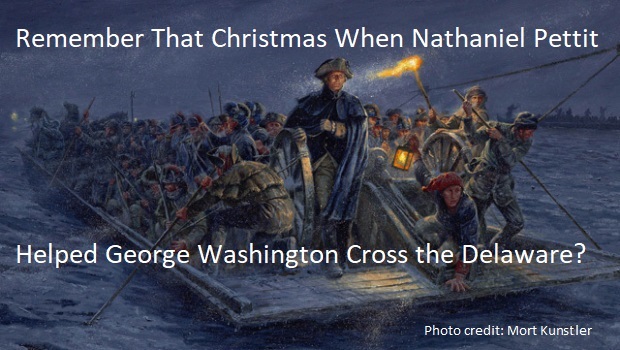 It was Christmas, 1776. Evening had just swept in. General George Washington looked out over the Delaware River as the first snowflakes began their gentle but ominous swirling descent into the darkening water below. He, like so many of the men under his command, had given up the warmth and comfort of his home to fight for a cause that now seemed desperately out of reach. 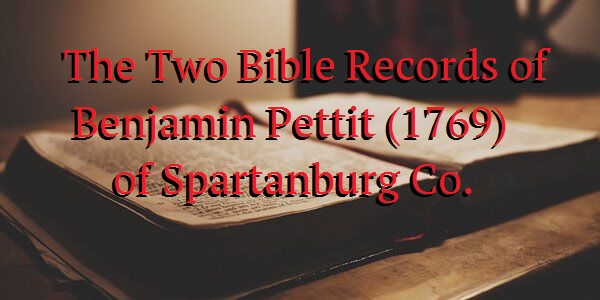 The story of how copies of the Benjamin Pettit (1769) family bible records have come down to us through the ages is one of intrigue. There are actually two distinct bible records in circulation among researchers which contain similar lists of the births of Benjamin and Elizabeth Pettit’s children.

Many genealogist who descend from Nathaniel H. Pettit innocently but erroneously claim Joshua Pettit Jr. and his wife Judith Poole as their ancestor.  If you are a descendant of Nathaniel H. Pettit of South Carolina relax but please read carefully.  You’re still connected to the SC Pettits, but probably not how you think!

This Bible record was received from Jeff D. Hendricks of Independence, MO. He is the great great grandson of Missourie Pettit. I originally corresponded with Mr. Hendricks in 1998 via email. At the time he had reviewed the Bible but did not own it. I contacted him again in August of 2018 and he informed me that he was now in possession of the Bible

On the 13th day of June in 1846 in Gilmer County, Georgia, John Pettit stood before his brother Henry Pettit Jr. (b. 1790), the Justice of the Inferior Court. His deposition that day was in regards to the settlement of the Revolutionary War pension account of his father Henry Sr. (b. 1763). John’s mother, Anna (Poole) Pettit, who had been in his care since the death of his father, had recently passed on as well.

Joshua Pettit traveled the South Branch, VA area and stopped in at the Steenbergen Ordinary at various times in 1767, 1768 and 1770. This Joshua Pettit was there in 1768 at the same time as Richard Pearis.