What follows is a transcribed account of some of the John Pettit (1608-1662) family history as written by Elnora Pettit DELVIN (1808-1886) who was the daughter of Dr. James Pettit and Lucy Felt.  This history appears to have been written for Elnora’s granddaughter, a daughter of Lucy Delvin BAILY.  It was compiled from personal experience, recollections of stories passed down, as well as from ancient letters and records in the possession of her sister, Harriet Pettit, which stretched back into the late 1700s.  Elnora’s account starts by retelling an 1825 record taken down by her brother William Pettit from his interview of their grandfather, Captain Johnathan Pettit (1753-1835).  Elnora began this family history project in 1864 and concluded it on July 20, 1878.  The primary focus of her writing was her mother, Lucy Felt Pettit, who she affectionately called “Golden Hair”.  However, a good number of other family members and other figures are discussed. 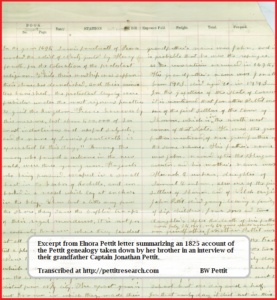 Excerpt from Elnora Pettit letter summarizing the 1825 account of the Pettit genealogy given by Captain Jonathan Pettit.

Following her self-described conclusion in July of 1878, in November of that same year, her sister Harriet died, and Elnora inherited the family records which had been in her sister’s possession.  She described these records as “voluminous”.  It would seem she also came to possess 38 letters written between her brother William Harrison Pettit and his wife Hannah BARLOW.  William worked as a clerk in Washington DC in the war years from 1863 up until the time of his accidental death in 1865.  The sum of all these records eventually found their way into the hands of one Mr. Paul Durrie.  Mr. Durrie’s wife, Marion Lucille Waldron, was the daughter of Edward Moorhouse and Lucy Orinda Pettit.  Lucy Orinda Pettit was William Harrison Pettit’s daughter and a niece to the author of this account.

Elnora Pettit and William Harrison Pettit’s father, Dr. James Pettit is known for inventing the Pettit Eye Salve later sold by the Howard Brothers, as well as his family’s involvement in the underground railroad prior to Lincoln’s War.  Many of his children were involved in the abolition movement.  Perhaps the most prominent was Eber M. Pettit whose memoirs were published in Sketches in the History of the Underground Railroad in 1879.  (A full PDF version of this book is available for download in the Documents section of this website.)

This branch of Pettits was well educated and careful to preserve their lineage to the 1600s.  Aside from the account which is the subject of this article, there are at least two other accounts, both of which are senior to this one. These early accounts traced their lineage to the Pettits of Sharon, CT and a John Pettit born around 1608.  It is said that the Pettits came to New Rochelle, NY from France at the time of the revocation of the Edit of Nantes which doesn’t easily square with the historical timeline presented.  Nevertheless, this tradition is firmly cemented in the written and oral history of this Pettit clan and should not be dismissed without considering the root of the legend .

From other records, Elnora Pettit’s lineage appears to be as follows:

With the background given above, the family history produced by Elnora Pettit can be understood in its original context.  The account is full of details which can easily be verified and other private information which simply cannot.  Be that as it may, the reader is advised to weigh this source carefully and respectfully.  The transcription has been produced as near to the original form as possible with minimal comments, edits, or corrections.

Note: Researchers may freely copy this transcription but are asked to please cite the source similar to what is exemplified below.

[Written on the front and back of old ledger pages with two columns per page. Pages 12-17 transcribed below.  They are numbered page 6-9 in the original.  The complete transcription and paper including the source will be published in a separate article.]

“First draft of my family reminiscence.” by Elnora Pettit (b1808)

[Note #1: This quotation appears to be copied from a book titled Elements of General History: Ancient and Modern by By Lord Alexander Fraser Tytler Woodhouselee and published in 1831]

NOTE:  This transcription is imperfect and will be revised and corrected as time permits.  All revisions will be tracked in a change log at the bottom of the page.  If you would like to comment on something, want clarification on something or would like to try to decipher a missing word, please leave a comment below.