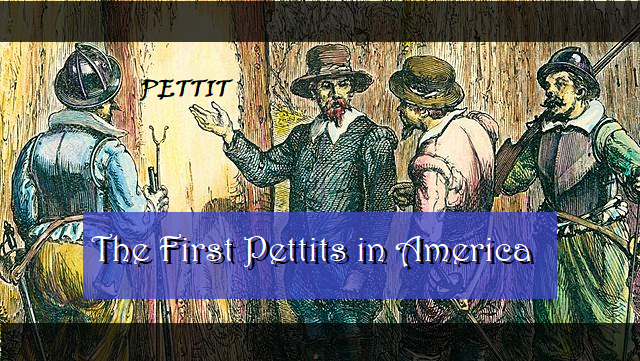 NOTE: This Thomas PETTIT is commonly confused with a Thomas PETTY of “Littletown” who was also in Virginia during this time period.  Thomas Petty’s name can be found in multiple records with various spelling including “Pettit” but these are two very different people in two very different areas of the colony.  A summary of the information about Thomas PETTY can be found in the post: First Pettits in America Series #3 –Thomas Pettit/Petty of Littletown Plantation near Jamestown, VA.  This present article covers Thomas PETTIT who married Katherine and died in Virginia around 1664.  He settled on the Rappahannock River whereas Thomas Petty was involved in the settlement on the James River near Jamestown. If you run across anyone claiming Thomas and Katherine Pettit were from Littletown, they have confused the two men.

The first appearance of  Thomas Pettit is in 1655, when he helped Clement Thresh inventory the estate of a William Ireland. Virginia Colonial Abstracts by Beverley Fleet abstracted this on p155 as seen below:

The next year, Thomas Pettit is mentioned in the inventory of the estate of Clement Thresh in September of 1657.  Thomas Pettit owed Mr. Thresh a debt of 456lbs (of tobacco).  Other debtors to Mr. Thresh listed in this inventory include William Brownhill, Richard Coleman, John Willis, John Goar (Gower),  William Wood, William Johnson, and Thomas Goodrich.  These men were mostly from the Rappahannock River area.  A snippet of this old document is shown below.

Thomas Goodrich, who was listed on this inventory with Pettit, was a back-country planter who would earn a place in the history books for his role in Bacon’s Rebellion.  In 1676, he was fined a staggering 50,000 lbs tobacco after he, along with his son Benjamin Goodrich, had led troops against Governor William Berkley’s soldiers.  Thomas Goodrich was a colonel in the militia during the uprising.  He was unable to pay the hefty fine and forfeited some of his land to cover it.  This land became present day Tappahannock (seen in the map below.)  Note the name of the creek that runs through Tappahannock into the Rappahannock River: Hoskins Creek. (This is the same creek mentioned in the land deed of Francis Goare to Thomas Pettit.)

Rough location of Thomas Goodrich’s land. Thomas Pettit acquired land on the east side of Hoskins Creek in 1656.

Thomas Pettit appeared in the Rappahannock County records again on March 1, 1662, when he and an Ann Stephens witnessed a bond between Joseph Robins and Captain Robert Vicarage of Bristol.

A year after witnessing this bond, Thomas Pettit made out his will in September of 1663.  A rough transcription of that will is seen below:

I Thomas Pettit of ye County of Rapp”. and in ye parish of Farnham being in a Weak Estate of body but in perfect mind & Memory make this my last Will & Testament, first I bequeath my soul unto Almighty God & my body unto ye ground to be buried with assured  belief of the Resurection and that after this life my Soul & body shall be united in one & enjoy that Eternall bliss where my Redemer liveth, First I give and bequeath unto my Daughter Dorothy three female Cattle, one Cow named Cherry, and two heifers Comonly called by ye name of Good luck, & Slow them & their female Increase,I give unto my aforesd. Daughter & her heirs for Ever but ye Male to remaine to those that look after them until she come of age I do also give and bequeath all my Land ye is Really mine ye is to say a pattent of one hundred acres adjoining to ye Land I now live on ye which Land encludes two hundred & Eighty acres by conveyance specified this Land heretofore mentioned my aforesaid Daughter Dorothy is to have when she cometh to age for her & her heirs for Ever, and in case of ye death of my aforesd. Daughter Dorothy before she cometh to Enjoy this Land according to ye term of my will then the sd Land here given unto my Daughter to my Wife Katherine for her & her heirs for Ever & in ye meantime untill my Daughter be of age as aforesd. my wife Katherine to inherit & enjoy for her use in every kind whatsoever not destroying any timber nor to make sale nor diminish anymore than what shall go for ye use of her own housing and Cropps & likewise I doe also include that in case my wife Katherine aforesd. keep her self a Widow that she shall freely and whºlly enjoy the Land with the proffits thereof according to ye tenor aforesd. during her life I do also give & bequeath unto my Wife after my Death my debts Satisfyed all ye rest of my personal Estate both within doors & without unto her & her hrs for Ever I doe also here ordaine and apoint my friend Nicholas White and my friend Thomas Cooper overseers of this my last will & Testament ye day & year above written
Thomas Pettit  Seal

In his will, Thomas Pettit divided his property between his two living heirs at the time; his wife Katherine and daughter Dorothy Pettit. However, Katherine was with child, and in the spring following her husband’s death she gave birth to his son.  She named him Thomas.

On June 3, 1665, the widow Katherine Pettit made an entry into the deed books of Rappahannock County granting a portion of her property “unto my son Thomas Pettit.”  She assigned to him one black heifer and all its female increase until Thomas was twelve years old.  This deed was witnessed by Thomas Goodrich and Robert Beverly.

Years later, in 1716 Thomas Pettit Jr. brought a suit against Godfrey Stanton involving land that had belonged to his father.  A jury was tasked with resolving the issue and investigated and reported their findings in the land trial.  They stated that “we find Thomas Pettit son and heir and son of the said Thomas Pettit in the deed Gowar mentioned…” and that he was “born in the spring after the death of his said father…”  They also found “the said Thomas Pettit left his wife Katherine…” the land and she lived on the land following his death.  It was determined that Dorothy Pettit was married to Godfrey Stanton who was the defendant in the suit.  A full copy of the land trial can be viewed by clicking the image snippet below.

Click here for a full copy of the Virginia Land trial document of Thomas Pettit Jr. which describes his birth after the death of his father Thomas Pettit Sr.

Like his father, Thomas Jr. is commonly confused by researchers with a Thomas Petty Jr. of the James River settlement.  Thomas Pettit Jr. of Rappahannock, son of Thomas and Katherine Pettit, married Rachel WILSON. This is evident from a 1698 deed where he sold land on Hoskins Creek.  In this deed, his wife Rachel released her dower rights and named her brother Abraham Wilson as her lawful attorney.  This deed was recorded in Essex County, VA, in Will and Deed Book II p312-313.

Dorothy Pettit is also mentioned in various other documents of the area.  In 1674 she was a witness to a deed between William Johnson and Thomas Gains as seen below. 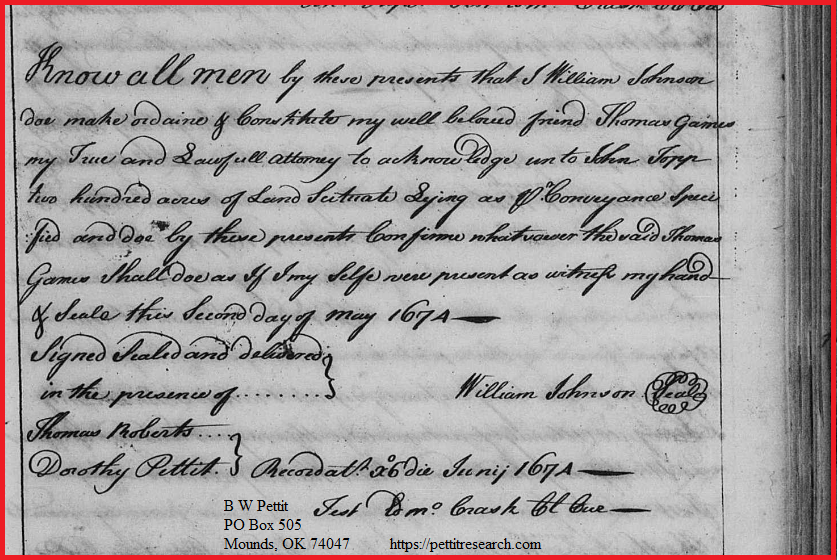 Thomas Pettit lived on the Rappahannock River settlement in Virginia as early as 1656.  He and his wife Katherine had a daughter named Dorothy.  Thomas made out his will in 1663 and died shortly thereafter leaving property on Hoskins Creek to his wife and daughter. His wife was pregnant at the time of his death.  His son Thomas Pettit Jr. was born in the spring following his death.  This Thomas Pettit Jr. married Rachel Wilson.

Thomas Pettit of the Rappahannock River settlement in Virginia is the ancestor of a number of Pettits in America today.  Though the connection has not been verified by this researcher at the time of this writing, he was very likely the ancestor of all Pettits who trace their line to Surry County, NC. This would include those descendants who have been traditionally identified with Benjamin Pettit and Elizabeth Sprinkle and Benjamin Pettit and Rebecca Larrimore.